Annie Uzunova: I have never been late for a workout or match 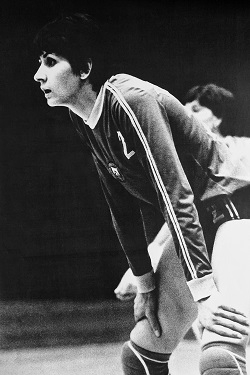 - Why did you choose to practice volleyball?

- I am from a village - Koprivlen, Blagoevgrad district, where there were many nice sport playgrounds. We also had a teacher who was in charge of the sport. I started practicing basketball and athletics, but suddenly I found myself on the volleyball playground and since then until the end of my sport career, even until 5 years ago, it was only that - volleyball.

- What qualities does the team play develops in a person?

- The team game builds discipline, order, accuracy - I have never been late for training or match. Most you learn is discipline and respect for your colleagues because it is a collective sport. It's hard to be in a team with another 15 different characters. The role of the coach is also important, who can also make the team members friends, to prevent any arguments or quarrels because that's how the whole team moves forward. I think it's harder to be in a team. In individual sports, if you are not able to overcome the challange, there is no one to help you. But in team play, if today is not your day and your colleagues play well enough, they can somehow compensate for your mistakes.

- How to get an Olympic medal?

- The secret is hard work, but a lot of hard work and lots of trainings. Sometimes they are 3 times a day and you have to come in addition. But once you see that success is coming, you are getting better, the desire to reach the third, then the second and the first place becomes even bigger. And when you start to achieve them, you continue to train even more to earn even more. At the 1980 Olympics in Moscow we did not get to gold but bronze. But that has not demotivate us - we became European champions in Sofia next year. In order to get things done, you have to train nonstop.

- What is the most memorable moment of your career?

- For me this is the European title in Sofia in 1981. My son was 6 years old, and the whole game he was on my father's shoulders. I looked at him from time to time and this gave me strength. And then we also played in front of our audience in Sofia. Half an hour after we won against the Russians  I did not know where I was, the feeling is indescribable. I remember it like today.

- What is your covenant to the young people?

- Sport, sport, sport. The truth is in the sport. As soon as you start - fight until you get results.

* The interview is published with edits by the author. All rights to the text created under the project "Olympic Medalists of the City of Plovdiv"  belongs to Municipal Enetreprise Youth Center Plovdiv