Gocho Vassilev: Football is like a theater - if there are good artists, there is audience 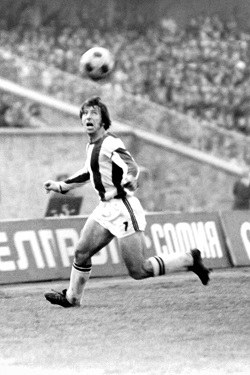 - What was the moment when you realized you wanted to train football?

- My mother was a teacher, and she wanted me to become an engineer, a doctor a person with a serious profession. She told me that she did not want  "empty heads" at home, but I was drawn to football and started training in high school, I was in the Pirin team, where I was also a top scorer of the Southwest Group B. Then I went to Lokomotiv Plovdiv We had a very good coach - Dimitar Grigorov, as well as an assistant coach - Panayot Tanev, who were very busy with us. I scored a goal in my first match for Lokomotiv. Thanks to my hard work I could find my place in the team. When my mother came to watch me in a game and saw the people holding me in the air on their hands, she told me she had been glad that I had not listen to her, and that I continued to train football. She wanted me to have a degree in higher education, so I graduated in Higher Sport Institute and Higher Institute for Phycical Activity "Georgi Dimitrov".

- How does team play help build a one's personality?

- First of all, sport always teaches work, discipline, responsibility, being ethical and hardworking. And for the team - you need to work with the peole. As an example, the Ajax team in the 1960s, they were like a machine that was so well crafted and that is why they achieved a great success. The team needs to stick together and each one should get along with everyone- that is how big football is made. But it also takes a lot of work and a lot of running.

- How long is the way to the Olympic medal?

- The road is very long. You have to be persistant and always to be in good shape together with your teammates. Otherwise, with laziness it does not happen. In sports, if you do not work, you will not succeed. It gives a lot, but you have to be smart and hardworking. Otherwise, you remain on an average level. You should also strive for the heights. At the Olympic Games in Mexico in 1968, we had very good players, we had good leadership and great coaches, and so we succeeded. We could even get a gold medal, but in the unfortunate final match with the Hungarians, the judge put penalties on three people from our team. Still, when we took the silver medal, it was a great joy, and we all enjoyed it. Whenever you win, it's a joy.

- Does the audience you are playing influence the game? What is the feeling of the Olympics?

- Some players are embarrassed by the audience. But it does not bother me, it has to be called. I had experience since the derby matches in Plovdiv. It does not act mentally, it even motivates me. And at the Olympics - the stadiums are great, the acoustics are good, and there is a lot of cries, a lot of emotion.

- Which is the most memorable goal in your career?

- Every goal is nice and brings joy. Especially when it is on an international competition. I, for example, remember my goal against Juventus since it was at the 47th second since the begining.

- Today football is one of the most popular sports in Bulgaria. But it is noticeable that no high results are achieved. What do today's players need to be motivated and want to win an Olympic medal?

- Now, looking at the stadium there are not so many people in the audience, and I feel sorry. And with us, it was different. Today's footballers must show greater skill, and efforts are needed for this and there will be more interest by the audience. I want to tell young people always to work for improving themselves, not to be mediocre. The audience wants to see masters,  to see dynamics, interesting situations. Football is like a theater - when there are good artists, there is numerous audiences. Whoever plays the role well gets the applauds, and who does not - it's cheering.