Peter Lesov: After my first race, I decided I did not get to boxing! 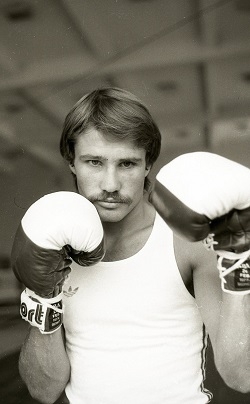 - Why did you recognize boxing as a sport for you?

- The boxing began to develop in the town of Rakovski in 1972 under the leadership of Lyuben Gadzhev. Two of my cousins, Peter and Jordan Lesos, also trained. I was a little wild and the coach chased me for 2 years until I started with boxing. My first race was in Plovdiv and I have been a boxer for only a month. I lost 2 to 3 from my rival. And then I decided to give up and stopped going to workouts. Then the coach came to me and told me that I was chosen to compete for the Republican medal. When I heard about a medal, I started to work hard but without informing my parents. Maybe I was boxing for 5-6 month boxer when I took part in my first Republican Championship in 1974 and became a champion. I was awarded with the trophy for "The most fighting competitor". Then they printed photos in the newspaper. From there my parents learned about boxing.  Since then, when I had difficult times when I wanted to give up, they were people who encouraged me to continue playing.

- You have won an Olympic medal when you were less than 20 years old, which makes you the youngest Bulgarian with such an award. How did you achieve it?

- This has to be experienced. It took a lot of hard work and a lot of hunger to keep 51 kilos. Most people think that it's hard to fight on the ring, but it's not as scary as weight maintenance. After I became a world champion, I have played in many tournaments. For two years I have no losts either in Bulgaria or abroad. People were even then seeing the medalist in me. At the World Cup I was in the best shape and I played with a European and world champion from Poland. I won. And I do not know what happened to Strandzha tournament - I had one opponent Dinko Vasilev. I lost then, and he won all three boxing mathces with knockout, and at that moment the terrible competition between us started. However he did not want to compete with me. It was good for us that we both were from CSKA. There were judges who then let us play with a player from Cuba. I beat him and Dinko lost. Then I beated him in sparring and there was no other way - it was decided. That was the start of my successful career - the World Championship, and at the Olympics I justified the expectations toward me.

- Do you remember the feeling of that time?

- Again I say - it has to be experienced, to be felt. You have no idea what is happening. Imagine the way the people meet you, how they enjoy themselves. Back then there was no money or prize, and the most important was the love of the people. Boxing was a popular sport. When I came here in Plovdiv, I could not take two steps on the main street without someone stopping me.The respect of the people gave me great pleasure.

- What responsibilities does the medal brings?

- After the medal you are afraid of losing, which also made me more ambitious - it made me train more and I did it. Immediately afterwards I became a European champion - 3 times in a row without any problem. Afterwards it's the world championship for men, but I did not won this because in Rakovski we played amateur football and I was badly injured. I missed a whole month that I could not train and get on my feet. I was then captain of the national team and did not want to participate in the European championship because I did not feel prepared. But Ivaylo Marinov said that if I do not play and he would also not be on the ring. So I was forced to go and lost for the first time in the first match. But after that I became European champion and took the Cup "Strandja". Just no one could beat me. But unfortunately I got hepatitis and stopped my career. I was at the age of 24. They offered me to be a coach for CSKA and the national team and so began with coaching.

- What's the difference between being a racer and being a boxing coach? Do they have any similarities?

- The first is that as a competitor you have your own responsibility and as a coach it's much harder. You are working  to prepare your competitor. Many people tell me that I have very big requirements. Maybe because I achieved successes, I want everyone to be like me. Tension is much greater when you are a coach.

- What are the most important things young athletes have to follow in order to achieve high honors and secure success?

- If you want to be successful, you are restricted from other things, but it's worth it. Future and current athletes: hang in there, take sport seriousy so that you also achieve Olympic medals.