Nikolay Buhalov: The formula for success in life is to do things with love 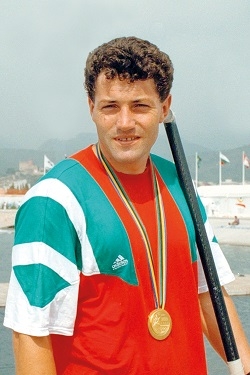 - Where did everything start? How did you began rowing?

- It was by chance. Since I was very young I loved to play, to sport. I had good physical shape and I started training wrestling. But after a few trainings I realized it was not for me. My first coach, Georgi Uchkunov, was on a selective tour. He suggested to 3 boys of our class to attend the entrance exams at the sports school, but only I went. Even in the beginning, I had no idea what the canoe-kayak was. But I have always loved the water because the village where I grew up in is near the Stryama river and part of my time was playing games. And when I realized that the canoe-kayak was connected to the water, I liked it and this dragged me in. Perhaps fate has chosen me, and I have been purposeful and I have been looking to do things in the best way and to the end.

- What is the way to Olympic medal?

- In my time, things were more like a game. I have never loved to beat and maybe that's one of the things that led me to success. In principle, as a person I am very good and compassionate, but in the sport it is not so - it hurts me if someone defeat me. A great influence on me was that I started training in 1980, when Lubomir Lyubenov was already an Olympic champion and he was my idol. A role model, we all wanted to be like him - perhaps me more than others. That's how it all started - the first medal came from the Republican Junior Championship. The first European championship came. And despite the fact that I was 3 years younger than the other athletes, I qualified for the final and I was 9th. Then at the first World Junior Championship I became third, I went to the men and I was ranked third. There have always been good situations for me, but the gold medal has slipped. Even in 1986 I could become a world champion, but it did not work.

- Why is this diversion with the gold medal?

- I did not have enough experience, the weather conditions were very bad - I was a right rower and the wind was left. If it was quiet or with a favourable wind ... But it was not known how my career would develop if I had win at such an early age. I have also seen this as a coach - you are thinking you are great and this reflects negatively on your career. After this I went second, and then I was disqualified. Even they invented new rules in the canoe for me - to ride in the middle of the corridor. In 1988 I became third. Then I did not drive in my master discipline for one reason or another, but I do not want to go back so much as I competed at 1000 meters. I reached the Barcelona Olympics in 1992 - my first honors, which was straight to the point. Thanks to this I became so famous. The Olympic prize remains, it is remembered, and especially that mine were two. There fate helped me, it gave  to me everything I had not done before.

- What remains hidden for society when winning a medal?

- What you need is to do what you like. I like the canoe kayak. Sometimes it was so difficult for me that I could cry. But I did it with love. And I think this is the formula for success in life - one should not think of what is deprived, what he loses, but to do what he likes. Then things are easier and achievable. For me, sport has always been a hobby, not a profession, because I have not pursued the material. I am grateful and happy that I have had the opportunity to get to the place that is right for me.

- You are the only Bulgarian with two gold medals from one Olympic Game. So far, no one has improved this achievement. How do you think young athletes should be motivated to achieve such high results?

- Everything is possible, there is nothing impossible. If we achieved it, others can also. When an athlete starts, it seems impossible. But on the way to the big win, every victory is important. If one begins to settle for the losses, this person settles for this that he/she would not reaching the highest place. Everything is step-by-step, persistence. Even when a person loses, they have to analyze themselves. Any loss can lead to great success when you withdraw the right conclusions.

* The interview is published with edits by the author. All rights to the text created under the project "Olympic Medalists of the City of Plovdiv" belongs to "Youth Center Plovdiv"  and are preserved.