The two-fold Olympic medalist Ginka Gyurova: Without will and sports spite nothing can be achieved 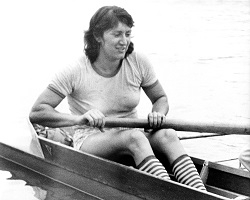 - Why did you decide to practice rowing?

- I liked and practiced athletics. When I applied to school in Plovdiv, Mrs. Milka Kuleva came to the vocational school where I was studying and motivated me to start racing. Thanks to her persistence, I continued to practice this sport.

- Then how did you reach the Olympic medal?

- With lots of hard work and stubbornness. Continuous control meetings were held, thanks to which we succeeded. The training was very heavy, but we had the ambition to realize and present ourselves on high level. Perhaps the sport spirit led us so that we can qualify ahead. This has also helped us to make teams of boats to represent ourselves worthy of the world championships and the Olympic Games.

- What qualities should an athlete have to win an Olympic medal?

- Essentially, they need to have sport will, motivation for sport, sport malice, and a desire for realization. And a lot of hard work.

- Is it any different to win an Olympic medal than any other race?

- It's very different. At the Olympic Games you see people you can not see in any other place. While at the World Cup, each team's is housed separately in the Olympic town, absolutely all teams of different sports are in one place. You see sporting glory and you experience the ranking of all athletes. I remember that in the morning a general meeting was held, where representatives of Bulgaria took note of the performance of our athletes, they were celebrating the Olympic medalists and winners. It also had an effect on us. At the same time, the excitement was very great. Especially in Mont Real, which was our first Olympic Game. Maybe that excitement played a bad joke and we did not win the gold medal from rewinding.

- How do you achieve synchronization in the team?

- To make a big boat is much more complicated than a small boat because it consists of 4 people. And we were four completely different personalities. You must mach your personalities, then fit the technique of rowing - synchronization is very important. We all - and all four - have to race like one, and this is achieved with a lot of workouts and a lot of work. But in spite of everything, we succeeded.

- You have competed in both - boats of the pair and the four. Is there a difference?

- There is a difference. The partner with whom you will be is extremely important. After the Olympics in Montreal in 1976, Liliana, with whom we rowed, married. With her we had matched and we had manage to achieve common rowing technique. Then I competed with a girl from Levski and her mentality was a liitle bit more fragile than the mentality of a competitor should be, and that may prevented us from doing a good job.We did better at regattas and training, than at the World Championship. She just could not accept the fact that we could become the first or second one. I will not forget one of the world championship competitions - we were one of the biggest regattas, we were ahead of the Germans and she suddenly stopped. She could not imagine that we had beat them because they were invincible. To be a contestant is very important to have a stable mentality .

- What is your message to young people?

- Sport requires a lot of work, lots of deprivation, but it also gives motivation to life development. Sport teaches us to lot of hard work, fighting, overcoming all the difficulties that appear to you in life. It also builds the mind, a sense of self-preservation and development. I'm just asking them to go back to sports fields, even if they do not become big athletes - at least to be able to create a drive for victory. This will help them a lot in life.