Penka Stoyanova: Experts said that my unique shooting at the basket has chilled the opponent 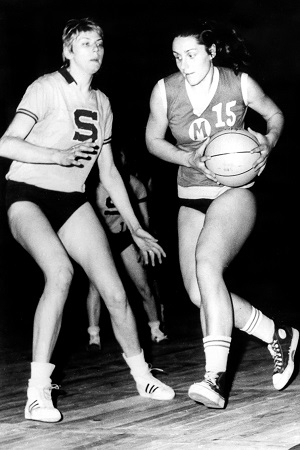 - When did you first touch a basketball ball? How did it all began?

- In 1963, in Karlovo I went to a basketball training session with my friend and classmate Yordanka Dobreva. Since the first time they showed me the basketball step, I did it. So I joined the girls' basketball team. I started participating in school competitions under the guidance of our teacher Stoyo Hubchev. On such a competition in the village of Rogosh, where referee Georgi Toshkov, who is from Plovdiv. When he saw me playing, he told Tencho Nachev that he had discovered a gold mine. Then they both persuade my parents to let me study in Plovdiv at the sport school. That's how my career started when it was still playing with leather balls, and sneakers.

- With the national team you are a silver medalist from the Olympic Games in Moscow in 1980. and bronze at the Montreal Olympics in 1976. What are the similarities  and what are the differences between winning the two Olympic medals?

- In the second year of my arrival in Plovdiv in 1966, I joined the national team for girls and in January 1967, at the age of 17, I became part of the national team of women under the guidance of Ivan Todorov. In 1976, with Ivan Galabov, we were one of the six teams of the first women's basketball teams at the Olympic Games. At the qualifications, we had equal points, but with one penalty, we won against Poland and so we ranked out of a total number of 24 countries. I personally was the best athlete - I was in the first place in a several indicators. They said I was a unique central player and thanks to my qualities the Bulgarian team win a bronze medal. The qualifications that took place in Varna for the Moscow Olympic Games were also very controversial. It is interesting the fact that, the second year in the team were included younger contestants, but the core of 7 girls was the same. Interesting is the story of the contested game with Yugoslavia - we won, of course, I scored 27 points during the match and in the last few seconds I scored and with that we won our silver medals. I should also mention that the technical-tactical training of the coach Ivan Galabov was great. For the first time in my sporting career, Galabov used such a tactic. I was not set to play in defense in the center of the area, but on the side as a wing, in keeping with the high centers of the Yugoslavs, and thus saved me for the whole game. Nobody expected such a tactic. Our silver medal from these Olympic Games is the highest honors of the Bulgarian team of international competitions and will remain in the history of native basketball. This year is celebrated anniversary - 100 years of basketball in Bulgaria.

- You are the first Bulgarian basketball player who play professional basketball abroad. What is the difference between playing at home and abroad?

- In my time basketball was not professional but amateur - the game continued for 2 parts of 20 minutes and we had no threes - shooting from far, which counts for 3 points. Basketball was then very athletic, technical with a tactical and technical view of the game. More attention was paid to collective basketball, using the individual qualities of the contestants. Professional basketball for women was allowed by the rules of the 1980 Olympics in Moscow. Until then, it could not be played abroad. Aldo Vital, secretary of FIBA ​​and world hall manager, was the organizer of the Liliana Ronchetti Cup, where with the team of Maritza (Plovdiv) we were finalists 2 and 3 times champions (in 1971, 1972 and 1974) . Then he invited me to go to his team with girls which was formed in Italy (there was organized the first professional women's league). In my opinion, my sport career ended after the Olympic Games in Moscow. That's why I spent two years in the team of Vitali - "Roma", by putting on my competitive qualities, I gave these young girls my experience, spirit, character, will to win, the regime, the responsibility, the relations between the athletes and the coach, which is really important in one team. 7 girls from this team of were also in the national team of Italy. In 1983 William Jones Grand Prix, we ranked second with Italy's second national team. I could not stay there because there was political trouble. After returning to Bulgaria in 1983, these girls became champions of Italy, the champions of Europe and the "Ronchetti" Cup. In the Italian press it was written that I am like the team's flag of the team. The coach Gino Minervini , said my shooting was unique - chilling the opposing team.

- What did sport give you and what it takes from you? What is the sum of all the high awards during your career?

- I would say that sport did not take anything from me, it gave me. I had written a composition on the subject "What I Want to Become" in high school and I mentioned there that as a basketball player I want to compete for the national team and to bring glory to my country. I had a goal and a dream - I have always followed them and prospered. I have not lost anything, the awards I have received are the fruit of my labor, responsibility, faith, self-confidence.The sport has shaped me as a person. I had the opportunity to see other countries that, because of world politics, people were not able to participate. I am  grateful to the coaches, the people around me, my parents, because they found the courage to let me study in Plovdiv.

- You are included in the FIBA ​​list of 35 athletes who contributed to the development of world basketball in the second half of the 20th century. What would you advise young athletes today so that basketball develop?

- To rely on themselves, but also on the coach and the rest of the team. The young athletes must also read, educate themselves on psychology, physiology, history of sport with which they have decided to deal - what are their possibilities according to the height, and also to be aware on your position on the field. I see that  nowadays for the young people basketball is a power-athletic-technical sport. They are making it look like an attraction, they are into the technique they want to show. But if they do not score, where does the efforts go? Every basket is important, every point ... And I think this is now a little forgotten or neglected because of the attraction. That's why many big teams do not achieve their high goals. For example, at the Olympic Games they said the Bulgarian team has an extraordinary central striker, despite its low height, with qualities that every coach wants to own in his team. The Italian press wrote that I am like the flag of the team. It is important to be able to work in team. Also use your strong qualities to develop your weaker ones. I have always watched what others do, so that to use their qualities so that I can be like them and be like a team to have syncronization. There also could be idols, but the idols are till certain time. When you go to great sport, you have to play for yourself.